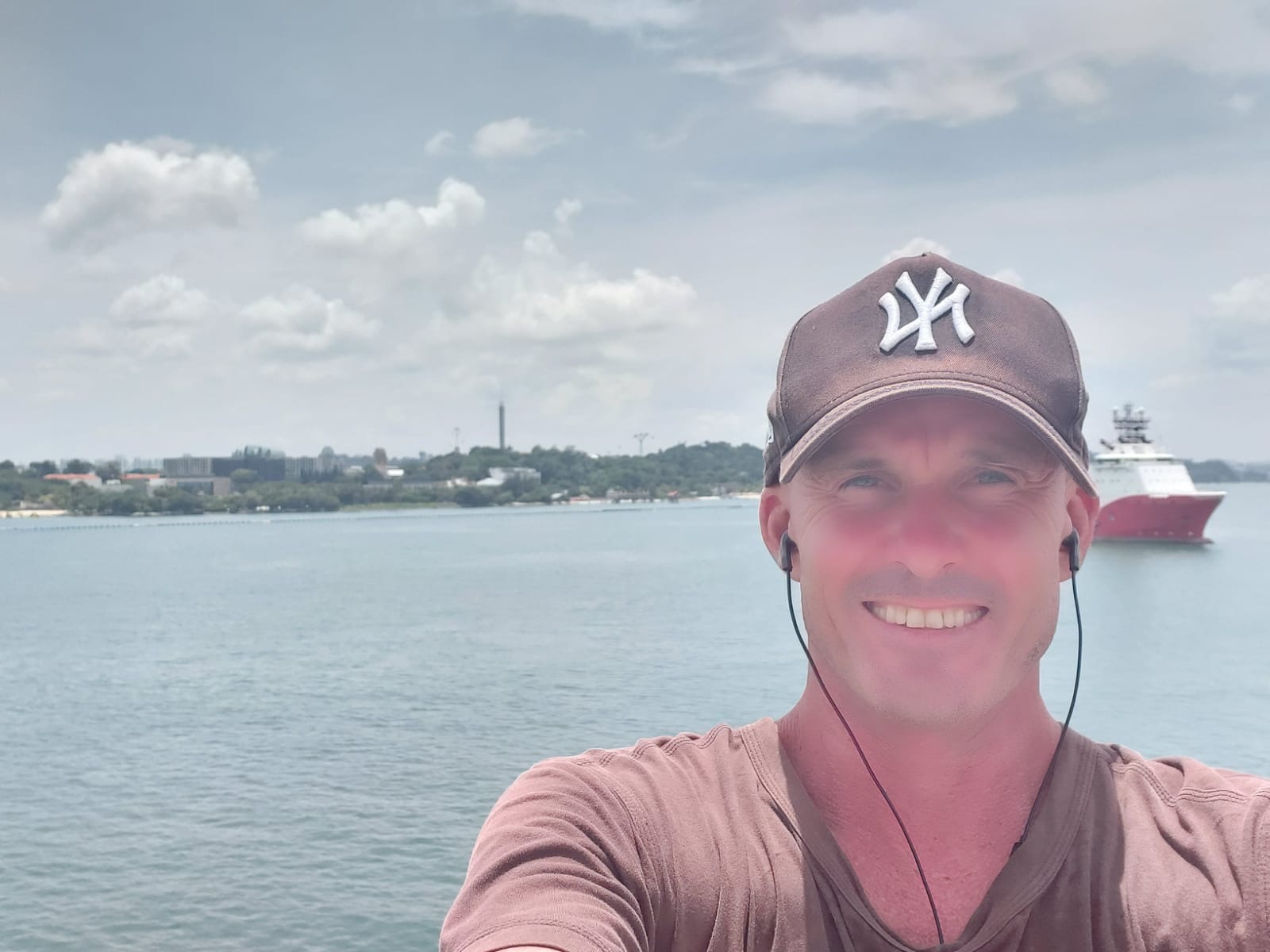 A silent, desolate LHR T4 London. WHSmith & Boots are open only for essentials. Maybe 50 persons seen at the departure hall. The bustling sound of conversation; queues at security; persons in a rush to their gate is an entity of the past – was it an apocalypse? It sure felt like it. Prior to my departure from the UK, I already knew this was going to be the start of a very unusual offshore project. Face masked and hands gloved, I hesitantly walked through security.

Upon arrival at Schiphol Airport AMS, the crew of the vessel found themselves in solitude in the airport hotel for 10 days. Some had views of a very obsolete and redundant runway being utilised maybe 2 or 3 times in the day. Other guests, had views into the very quiet hotel lobby, only utilised by the crew of the 2 vessels. Both crews were swob tested at the hotel for Covid 19. This was the first of many; 3 tests in total prior to reaching our final project destination; the South China Sea.

The hotel rooms albeit very comfortable, had very little to preoccupy the days waiting in isolation. Room keys were not provided affording no access leaving/entering the room. You were locked in due to Covid 19 and the unusual eeriness’ that surrounded you when looking out the hotel window over a very quiet Schiphol Airport, both on the landing strip and in the air.

After 10 days of room isolation and death by ‘carbs’; we left the hotel for the airport gate. Food was very heavy on pasta/rice and breaded breakfast sandwich. The occasional chocolate bar and kit kat broke up the otherwise bland breakfast tones. A chartered plane was waiting for our arrival – all 300 passengers boarded the plane with no entertainment except a single TV at the midway bulkhead. I was in a time tunnel, travelling overseas, bound for Sri Lanka. Unable to see the in-flight movie, I tried to sleep most of the way. The crew were greeted at the runway by ground staff in full bodied white suits; gloves and filtered gas masks (not face masks). We exited the plane, strangely walking on the runway; the terminal building not being used. We were sprayed in solution from head to toe before stepping into 4 buses for onward travel. On the bus the thought had entered our minds ‘What were we sprayed with?’. Upon our arrival at the quayside, we faced a 40 minute boat transfer to the vessel. We had finally made it onboard. We could settle into a routine onboard and focus on the project ahead; or at least that is what we thought.

Upon departure from Sri Lankan territorial waters, the project crew found themselves oddly in an 8 day transit bound for Singapore. Typically, this passage would have only been experienced by the marine crew departments. Unexpectedly, this was to be the second location for a Covid 19 swob test. We sailed West to East across the Indian Ocean; through the Malacca Straits to find Singapore at our exit. Due to the spread of the virus, Indonesian and Malaysian territories would not allow free passage of the vessel into their territorial waters. The vessel had to circumnavigate international waters in the Malacca Straits until the office could enable passage for a second Covid 19 test at Singapore anchorage.

With the test complete and all crew testing negative, we set sail for another 7 day passage. Vietnam to the West; the Philippines to the East and China to the North. Upon arrival at Hainan; a holiday island offshore China; the vessel was boarded by a team of white suited; gloved and masked border control operatives. This was to be our final third Covid 19 test. Again, all crew testing negative and having undergone twice daily temperature checks through the entire passage, starting from Schiphol Airport AMS, the crew of the vessel could begin work on the project.

Approximately 3.5 months into the project in China; with several instances of compassionate leave cancelled due to Covid 19 regulation; the last of the subsea project equipment was recovered to deck and the vessels began their passage back to Sri Lanka for disembarkation ending with a chartered flight back to Norway; some onward to the UK; others to Western European destinations; some back to Manila in the Philippines. Total duration away from loved ones at home, now standing at 4.5 months. Covid 19 transformed a typical 4.5 week crew change into a 4.5 month rotation with no crew change tolerated; either planned or sympathetic. Medivac’s returned from the Chinese hospitals to the vessels with no possibility of onward travel back home until the completion of the project. Crew that required compassionate leave or medivac’s having returned to the vessels disembarked in Singapore; the rest enduring the sail to Sri Lanka. This offshore experience was something I, nor the majority of the crew of the vessels wish to repeat again.

There were several glory days. Birthdays onboard were celebrated with cake in the recreation room; there were many. The crew celebrated 100 days onboard; we celebrated 100 ROV dives, again with cake. A barbecue was prepared by ship’s crew on the fore deck at the end of the project and refreshments enjoyed by all in the midday sun under the shelter of the heli-deck. One vessel moored at Raffles Anchorage. Thankfully, the vessel I sailed had a view of ‘the island of fun’, namely Sentosa Island. Moored at the Western Anchorage with views over Universal Studios, tempted many of us to a swim ashore; local maritime vessels and canoes toyed amongst the goliath ships of the seven seas. It was a reality check that we were finally back in a civilised world. A friendly face greeted us by boat the day after our arrival offshore Sentosa. Elevate Offshore Director, Andrew Blears added that personal touch to an otherwise impersonal voyage.

The experience is a story for the grand kids; fighting off pirates in the Malacca straits; avoiding high seas in the South China Sea generated by typhoons and a passage that only worldly & worthy seaman can cope, starting from Sri Lanka to China and back again. The project is for another story. A generation has been influenced by one of the greatest pandemics the world has seen in recent times, both aged and youthful.

Let this blog be a farewell & a calm sea sail to all those seafarers restricted by Covid 19 and a reminder to all, of the multi-national governmental Covid regulations that do not allow mass number crew changes freely between continents.

Elevate Offshore specializes in the provision of specialist personnel to the offshore Oil & Gas, Renewables, telecoms and power industries. We focus on delivering specialist project personnel to an International client base.